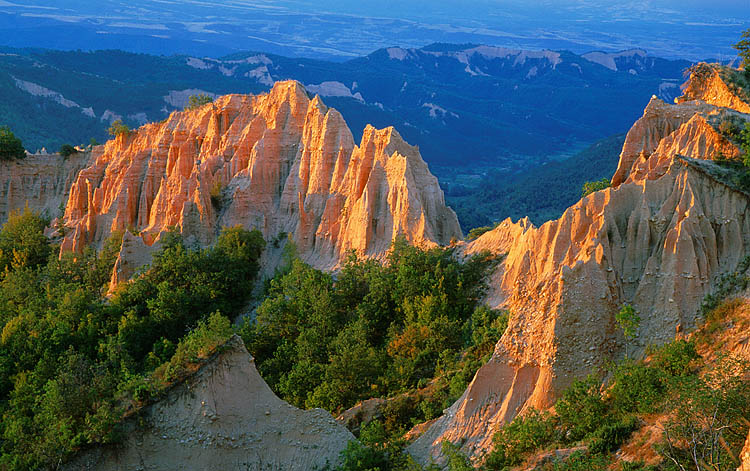 Melnik is a typical small town in southwestern Bulgaria but the impressive ammount of 96 buildings have been declared as cultural monuments and the whole town is an architectural reserve. It’s well hidden in Pirin mountain – one of the most beautiful mountains in Bulgaria. Close to the town are situated the sand pyramids of Melnik- one of the most interesting natural attractions in Bulgaria. They are rock formations scattered over an area of 50 square kilometers. The Melnik Pyramids were declared a natural landmark in 1960. They are divided into three groups – The Melnik, Karlanovo, and Rozhen Pyramids.

It is thought that the limestone of which they are composed is the result of erosion, and those forces continue to alter their shape. That’s why these unique natural formations attract tourists from all over the world. These fantastically sculpted rocks have assumed the most varied shapes and details, resembling stone mushrooms, haystacks, minarets, alpine ridges and peaks, swords, obelisks, Egyptian pyramids, Gothic cathedrals, and so forth.

Of particular interest are the pyramids in the vicinity of Karlanovo, in the Blagoevgrad region. These obelisks are 100 meters high, with sheer, unassailable cliff faces that are covered with tufts of grass.
To the south of the village Rozhen there are large and small stone mushrooms that also attract tourists.