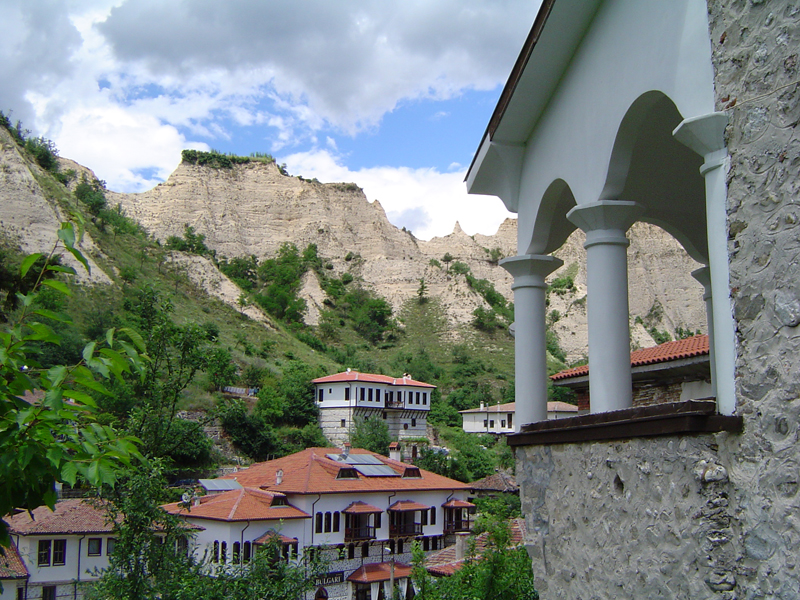 In the sunniest side of the Pirin mountain, among the exquisite draperies of bizarre sandstone pyramids sheltered a small town that keeps the Bulgarian spirit and traditions alive through the centuries. It is called Melnik. Melnik is the smallest town not only in Bulgaria but in the whole world – with a population of 325 inhabitants.It is situated in the Southwestern Bulgaria in the Pirin Mountains.With its perched one over the other picturesque houses with tiled roofs and white chimneys, narrow cobblestone streets  and ancient churches, enchant travelers with its timeless beauty and gives a fascinating glimpse of the past.

Some of the local sights include Kordopulova House  and the Pashova House which both are architectural monuments. The Kordopulova House  is the largest building from the Bulgarian National Revival in our country . It was built in 18th century and it was owned by a rich Melnik family,which were involved in wine producing.The Pashova House  was built in 19TH century.The house can be examined only on the outside due to restoration activities.Some of the ancient churches in town worth visiting are St.Nicholas, St.Anthony and St.Peter and St.Paul.

The area around Melnik is also interesting. Not far from the town there is Rozhen Monastery which is one of the few medieval Bulgarian monasteries well preserved until today and it is the biggest monasteries in the Pirin Mountains.

And of course,cannot fail  to mention the amazing nature of this region (Pirinsky Kray).On 17 square km around the town there are beautiful sand pyramids forming bizarre shapes which have formed over the centuries as a result of wind,rain and the constant erosion of the limestone cliffs.For hiking lovers there is a trailway through picturesque places going to Pyramids of Melnik. Also you can reach Pirin and Malina cabins from here or try other tourist routes.

Last but not the least,Melnik is the perfect place for wine tourism.The town has been famous for producing strong wine since at least 14th century.The trade secrets is being passed across the generations. One of the secrets of good wine matures lies in the constant temperature maintained in the cellar all year – 10-12 degrees.There are several modern wineries in the area which are producing high quality wine from local and international varieties.

The combination of good wine,wonderful local cuisine and the sights in this region turns Melnik not only into an excellent destination for gourmet and wine tourism,but also into a symbol of  the Bulgarian spirit and traditions passed across the generations.