Only a year ago another Bulgarian masterpiece was added to the world heritage list, namely the UNESCO Intangible Cultural Heritage List, and those are the unique performances of the “Bistrishki Babi” folk music ensemble. UNESCO was also instrumental in the process of conservation and renovation of the old part of the city of Plovdiv. 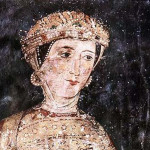 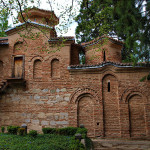 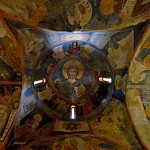 The Boyana Church, which is among the first Bulgarian sites inscribed on the list, is one of the symbols of the Second Bulgarian Kingdom and the age of growth of literature and high medieval culture that was the precursor of the European Renaissance. Part of the church murals date from 1259, they are an early testimony of the evolution of the Eastern Orthodox Canon and its influence on painters of the Trecento, one of whom is Giotto. "St. Nikola and Pantaleymon" is a medieval Bulgarian church located on the outskirts of Sofia, in the Boyana suburb at the foot of the Vitosha mountain. It is one of the cultural symbols of Bulgaria inscribed on the UNESCO world heritage list in 1979 under № 42. The frescoes in the church were painted in different periods: 11th -12th  century AD, 1259 (the most precious), 14th century AD, 16th -17th century AD and 1882. The world-famous frescoes painted in 1259(depicting 240 images comprising a second layer of frescoes painted over the original one) are of exceptional artistic quality and are the work of medieval artists (the so called «Boyana Master»), believed by some art critics to have belonged to the Turnovo School of Painting. 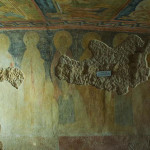 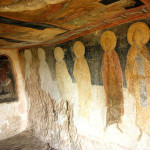 Rock-Hewn Churches of Ivanovo  The churches and their surrounding premises in the “Pismata” area near the village of Ivanovo form the large St Archangel Michael monastery complex. It was founded in the 1220’s by Monk Joakim who went on to become the first patriarch of Turnovo. During the rule of the Second Bulgarian Kingdom (ХІІІ-ХІV c. AD) the monastery maintained stable relations with the royal court in the capital city of Turnovo. Patrons of the monastery are King Ivan Asen ІІ (1218-1241), King Ivan Alexander (1331-1371) and other members of the families of medieval Bulgarian rulers, whose patron portraits have been preserved.  The 13th – and 14th-century frescoes preserved in the monastery complex were the work of prominent masters from the capital city, noted as examples of the development of the Komnin and Palaeologan styles of painting in Bulgaria. The world famous mid-14th-century murals in the Holy Mother of God Church represent one of the peaks in the development of medieval Bulgarian and Balkan art. 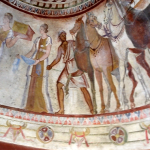 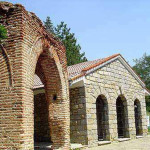 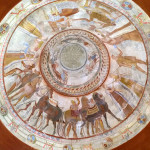 The Thracian Tomb of Kazanluk is a vaulted brickwork "beehive" (tholos) tomb near the town of Kazanluk, comprising a part of a large necropolis located near the ancient Thracian city of Sevtopolis. The monument dates back to the late 4th century – early 3rd century BC and was inscribed on the UNESCO World Heritage Site List in 1979. It owes its world fame to its unique murals in the hallway and the vaulted room, which are among the best-preserved ancient murals from the early Hellenistic period. 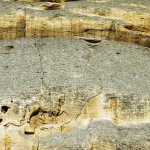 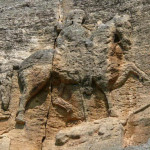 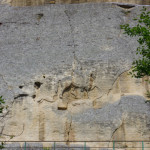 The Madara Rider is an archaeological monument representing a rock relief carved 23 m above ground level in a vertical cliff. It is located in North-East Bulgaria, near the village of Madara, about 20 km away from the town of Shoumen. It was inscribed on the UNESCO World Heritage Site List in 1979. The relief depicts a triumphant ruler – a symbol of the power of the Bulgarian state over the period when it was ruled by khans.  The relief depicts a life-size horseman, facing right, an eagle in heraldic position flying in front of the horseman, a jumping dog running after him, and a lion lying at his horse's front feet with a spear thrust into its chest. 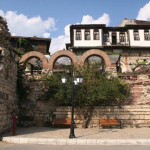 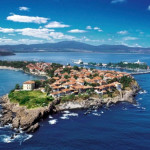 Nesebur – The old part is only 850 m long and 350 m wide. Over the various stages of its history its territory has shrunk by 1/3, which the town lost to the sea. Remnants of its fortress walls can still be seen under the water about 80 m off the shore. The only remaining wall is the Western fortress wall with the town gate that protected the settlement from invasions by land. The Nesebur peninsula – ancient Mesambria, called Mesemvria in the early Middle Ages and later Nesebur, was founded more than three thousand years ago. It was incorporated in the lands of the Bulgarian state in 812 AD by Khan Krum after a siege and became the home of Slavs and Bulgars.  Nesebur, as the Slavs called it, was then ceded back to Byzantium to be re- conquered later by King Simeon the Great and stay within the territory of Bulgaria during the period of his reign. In the 12th and the 13th c. the town developed active trade relations with Mediterranean and Adriatic states, as well as with kingdoms to the north of the Danube river. Nesebur maintained active trade relations with Constantinople, Venice, Genoa, Pisa, Ancona, Dubrovnik and other cities.  The churches of St. Stephen (9th c.) and St. John the Baptist (11th c.) are the prototypes of the masterpieces of 13th- and 14th –century Nesebur architecture, namely the churches of St. Petka (Paraskeva) (13th c.), St. Theodore (14th c.), Holy Archangels Michael and Gabriel (14th c.XIV), the style of the latter being analogous to the architectural style of churches in the then capital of Turnovo.  More churches were built under King Ivan Alexander – Christ Pantocrator (13th c.), St John Unconsecrated (14th c.). 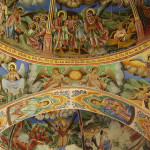 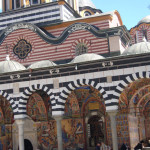 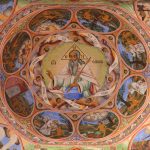 The Rila Monastery is a monastery governed directly by H.H. the Patriarch. It was founded in the 10th c. AD by St. John of Rila. It is the biggest monastery in Bulgaria. In 1335 a defense tower and a small one-nave church were built in the monastery yard by the local feudal Hrelyu. The tower is the oldest building of those preserved on the monastery complex, built in the style characteristic of the Turnovo School of Artists. The monastery has been a literary and educational centre ever since its establishment. During the Bulgarian National Revival Neofit Rilski founded a school in it. The monastery provided shelter to legendary Bulgarian freedom fighters such as Vasil Levski, Ilio Viovoda, Gotse Delchev, Peyo Yavorov, etc. In 1961 the monastery was declared a national museum and in 1976 – a national historical reserve. It was inscribed on the UNESCO world heritage list in 1983. The monastery has a collection of manuscripts, old printed books, documents dating from the 14th through the 19th c. and the monastery museum houses a number of old artifacts such as church service ware, staffs, icons, weaponry, a coin collection, etc. 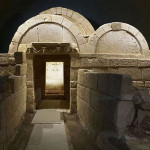 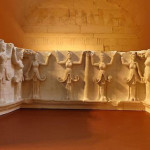 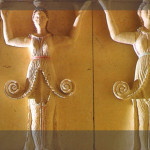 The Thracian Tomb of Sveshtari is located in the northeast of Bulgaria. It was discovered in 1982 during the excavation works in the high Ginina mound. It is a Thracian-Hellenistic tomb dating from the first half of the 3rd century BC. It is a royal tomb, allegedly the burial site of Dromihetes, king of the Getae. It is made of smoothly polished limestone blocks. It comprises a passage and three cube-shaped chambers: a narthex, a side chamber and a burial chamber covered with a semi-cylindrical vault. The hallway is decorated with pillars with Ionian capitals, over which lies a slate with a relief-decorated frieze of ox heads, rosettes, and garlands.  The Thracian Tomb of Sveshtari was inscribed on the UNESCO world heritage list in 1985. 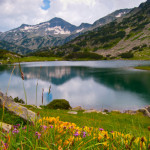 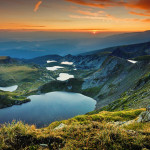 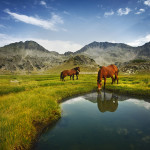 Pirin National Park – it was declared a national park in 1962 to the end of preserving its high-elevation forests. It was inscribed on the UNESCO world heritage list in 1983. There are two nature reserves within the national park, namely Baiuvi Dupki-Dzhindzhiritsa, which is one of the oldest reserves in Bulgaria and the Iulen reserve. The former is part of the world network of biosphere reserves under UNESCO's Man and the Biosphere Programme. 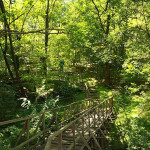 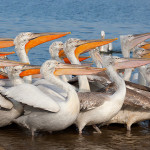 The Sreburna Nature Reserve is situated near the village of Sreburna, 16 km to the west of the town of Silistra. It includes Lake Sreburna and its surrounding area. The lake is located on the so-called Via Pontica, the most important migration route of migratory birds between Europe and Africa. The area was declared a reserve in 1948 covering a protected area of about 600 ha and a buffer zone of about 540 ha. The reserve is most famous for its great bird-watching potential. The reserve is a nesting area for 179 bird species, including curly-headed pelicans, cormorants, herons, mute swans, grey geese, ducks, etc. In 1975 the Sreburna reserve was included in the Ramsar List of Wetlands of International Importance. In 1977 it became part of the world network of biosphere reserves under UNESCO's Man and the Biosphere Programme. In 1983 it was inscribed on the UNESCO world heritage list. 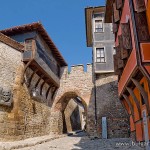 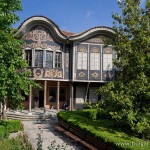 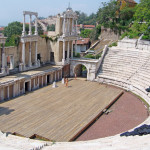 Old part of the city of Plovdiv Ancient Plovdiv Architectural Reserve is a well-preserved complex. The Old Town, as the complex is known, lies on a natural elevation – the three hills (the closely situated Dzhambaz Hill, Nebet Hill, and Taksim Hill). Many peoples have inhabited this place through the centuries. And all of them have left traces of their cultures and also the different names they gave to the town. Plovdiv is one of the oldest towns in Europe – it dates back to 4000 years BC. During Antiquity the Thracians came to the hill and set up a fortified settlement that was conquered by Philip of Macedon in the 2nd century BC. He gave one of the many names of the town - Philipopolis, and surrounded it with thick fortification walls. Later the Thracians regained control over the town, but after a series of battles they lost it to the Romans in the 1st century. A fortress from Thracian times is preserved on the very summit of Nebet Hill.

During the reign of the Roman Empire Plovdiv (then called Trimontium) was an important district centre. The town flourished and there was a construction boom of buildings, equipment and roads. Many well-preserved remains have survived from the prospering town, such as paved streets, fortification walls, buildings, water-supply system and sewerage. Trimontium expanded so much that it grew out of its walls and this called for the construction of new ones. Many parts of the town were located at the foot of the hill rather than on it. Some of the more interesting sites from the Roman Period are the Roman Theatre, the Roman Stadium, the Ancient Forum, and Irene Residential House. The Roman Theatre (the Amphitheatre) lies in a natural depression between Taksim and Dzhambaz Hills. It was constructed during the rule of Emperor Trajan (beginning of the 2nd century). It is extremely well-preserved. It used to have rich decoration and could seat up to seven thousand spectators. After it has been thoroughly restored, today performances can once again be staged at the ancient theatre.The Roman Stadium is located beneath Dzhumayata Square where only part of it is visible. It was built in the 2nd century and was designed after the Stadium at Delphi – there are only 12 such stadiums in the world. The Ancient Forum lies near Tsentralen Square, in close proximity to the Central Post Office. It was built in the 1st century during the reign of Emperor Vespasian. It is a complex comprising buildings, a library, a mint, an odeon, etc. Irene Residential House can be seen in the Archaeological Underpass on Tsar Boris III Blvd. It has very rich mosaic decoration which includes a portrait of a woman signed with the name Irene and dates back to the 3rd – 4th centuries.This was followed by the Byzantine period of the town – end of the 4th century. Not long after that the Slavs also came to this place – they named the town Paldin. The popular eastern fortress gate Hisar Kapia (Fortress Gate) is a remnant from the Middle Ages.

This website uses cookies to improve your experience. We'll assume you're ok with this, but you can opt-out if you wish
Accept Reject More...